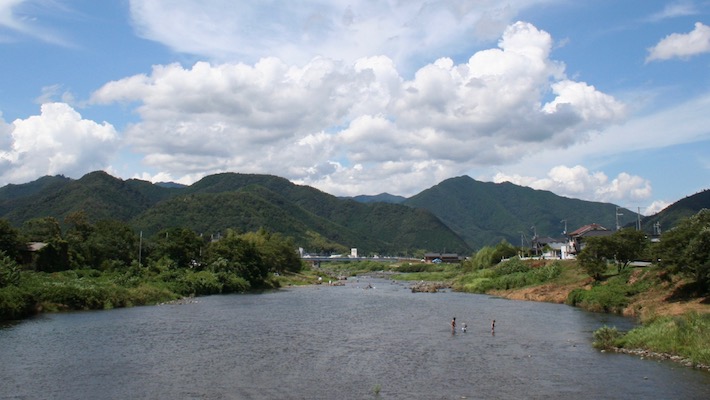 Kita-Harima perches on the mountains to the north. Higashi-Harima sprawls on the plains to the east. Nishi-Harima lies to the west, where the mountains touch the shoreline of the Seto Inland Sea. Five rivers flow as if to connect these three regions, which shape the Harima we know today.

There are some theories as to where Harima’s name originated. One theory states it’s because of its abundance of harema, meaning patches of sunlight. Another states it’s from the word harihama, describing the shoreline that resembles a stretched bow. The bow-shaped shoreline is uncommon along the Seto Inland Sea and is a popular fishing spot. It also served as a wharf for ships traveling to the Akashi Strait, making it a part of an integral shipping route.

River Trade between the Ocean and Mountains

Before the Edo period (1603–1867), water channels transported grains and fermented food to metropolitan areas. The Kako River, Chikusa River, and the Ibo River served as essential shipping routes. Energy resources such as firewood and charcoal were shipped out from the mountains, while items such as seaweed and dried sardines were shipped out from the coastal areas. Seaweed and small fish are full of minerals, making them crucial fertilizers for crops. The ocean and the mountains traded with each other through the rivers.

Relations within the region were necessary for an area like Harima with mountains and seashores. One way that fishing villages and farming villages maintained relations was by marrying off their daughters in “interregional marriages.” By merging families, relations between the villages grew stronger and encouraged trading between the mountainous and coastal regions. Changing mutually beneficial relationships into blood relationships was also necessary as security for survival for people of this time. It can be said that this culture emerged because Harima acted as one region and was not separated by mountains or the ocean.

The Culture of Handmade Gifts

In addition to interregional marriages, Harima’s custom of giving local products between relatives to celebrate was also formed. Fishing villages would gift handmade items such as ikanago no kugini, a local dish comprising small fish called a sand lance, simmered in sugar, soy sauce, sweet cooking wine, and ginger. While sand lance can be found all around the country, there is no evidence that this dish spread to other parts of the country. We know that the deep roots of Harima’s gift-giving culture and the act of handmaking were closely interwoven.